On Saturday, May 6, more 180 graduates gathered in the Neal D. Baisi Athletic Center gymnasium in Montgomery for the last WVU Tech commencement ceremony on the more than 100-year-old campus.

Bruce Wiegmann, a NASA aerospace engineer at the Marshall Space Flight Center in Huntsville, Alabama, addressed the graduating class. A 1981 graduate of WVU Tech’s mechanical engineering program, Wiegmann encouraged to students to use their skills to help build stronger communities and economies, particularly in West Virginia.

“Today’s WVU Tech graduates have the tools and infrastructure before them for ready use that I didn’t have when I graduated – the digital highway. You can combine a great education with this great infrastructure tool to grow high-tech micro industries here in West Virginia. Where the older generations dream of the manufacturing and mining jobs of yesterday returning to the state, these new WVU Tech grads – the last class to graduate from these distinguished grounds – must use their WVU Tech education and skills to create a new industrial phoenix in West Virginia; one that nurtures and grows new high tech industries,” he said.

Campus President Carolyn Long thanked graduates for the indelible mark they left on the university with their work over the years and offered advice to those about to face change in their lives.

WVU Tech Student Government Association president Rob Leibel, a graduate of the mechanical engineering program, shared his pride in the diversity of WVU Tech’s student body and his confidence in the university’s transition to the Beckley campus.

“Despite all the various backgrounds we come from, we are united today, graduating together as part of a Golden bear family,” he said. “You can say it’s not the same and, realistically, it won’t be. But being open to possibilities will help us with change in the future. Be open to the possibility that this change will lead to an even bigger Golden Bear family.”

For student like Shannon Wiercioch, a graduating criminal justice and psychology double-major from Harper’s Ferry, West Virginia, the day was the culmination of a lot hard work and a chance to celebrate friendships made along the way.

“It’s been pretty great. I made wonderful friends and I got to experience a lot at Tech,” she said. “The ceremony was super sweet and a little emotional. It’s sad to leave, but I’m so excited to get started and see what my future holds.”

Next year’s commencement will be hosted on WVU Tech’s new campus in Beckley, West Virginia. 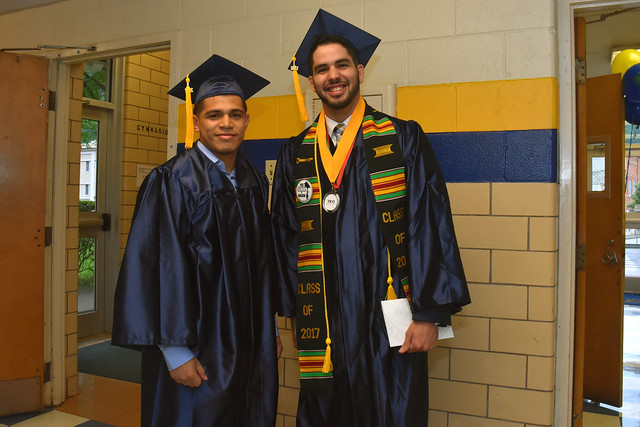